Have you been diagnosed with C. diff, or do you have a family member suffering from symptoms of a C. diff infection? Do you want to know what causes C. diff, how to limit its spread, and modern treatment options?

In C. Diff In 30 Minutes: A Guide to Clostridium Difficile for Patients and Families, author, doctor, and Harvard Medical School Professor J. Thomas Lamont, M.D. uses plain-English explanations and case studies to describe this unpleasant gastrointestinal infection and how it can be successfully treated. One of the world’s top experts on C. diff, Dr. Lamont has conducted ground-breaking research on the bacterium and has helped thousands of patients. Contents include: 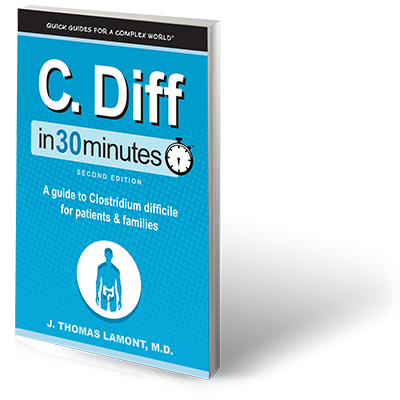 Use the links below to download the ebook or PDF, or purchase a paperback copy of C. Diff In 30 Minutes.

This book answered all of my questions and I would recommend it to anyone (and their family members) who have had the horrible disease that is C. diff.

When I learned in 2013 that I had C. diff, I found this little book to be a lifesaver ... The book is WELL WORTH its nominal cost!

When I was diagnosed, my husband looked at the library & bookstores. Finally, my daughter went to Amazon. I wish I'd had this book long ago.

This has been the best information yet. I am a former C. diff patient. My mother is currently hospitalized with it. We now know what to do for her and how to protect others over the next few months.

Unlike other C. Diff books, C. Diff In 30 Minutes includes four C. diff case histories. The names, identities, and other details of the patients have been changed to protect their privacy, and the photos are not of real patients. You, a friend or a family member may have experiences similar to Jeannie, Al, Mrs. E, and Martina. While the patients profiled in the book are quite different, they share a few things in common: All were healthy and active before they got C. diff, but eventually felt that the infection had taken over their lives. Even though the infection severely impacted their lives and caused worry for them and their family members, the good news is that all eventually recovered and have returned to their original health status. 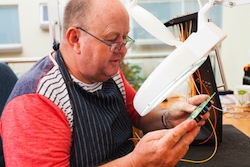 Al was a very healthy 62-year-old electrician. That is, until he developed an abscess on his wisdom tooth. His dentist prescribed the antibiotic clindamycin for seven days to treat the abscess and scheduled a root canal.

Five days after Al finished the clindamycin, he developed diarrhea, an upset stomach, and pain in the lower abdomen. The diarrhea was severe, occurring up to 10 times per day. He called his doctor who tested his stools for C. diff. The result was positive. Treatment was started with 10 days of Flagyl (one of the same antibiotics taken by Jeannie) four times per day. By the fifth day, his diarrhea was almost gone and Al was ready to go back to work.

Four days later the diarrhea returned. It was as bad as it had been in the beginning. This time, Al’s doctor started him on Vanco (the other antibiotic taken by Jeannie) four times per day. Again, Al appeared to recover, and the diarrhea went away. But eight days after Al stopped the Vanco, it came back — the same smelly diarrhea with lots of mucus and cramps. Al was frustrated now and worried that he might never get rid of his C. diff.

His primary care doctor was frustrated, too. He arranged for Al to see an infectious disease specialist at a teaching hospital in Boston. The specialist recommended a pulse-taper of vancomycin for eight weeks, during which the Vanco was taken in a gradually decreasing dose. It started with one capsule four times per day, and ended with one capsule every other day for the last week.

Al finished the eight weeks of Vanco and followed this up with four weeks of Culturelle, a probiotic. Probiotics are dried bacteria or yeasts that are designed to help the colonic flora, the bacteria and other microorganisms that live in our large bowel (colon), to return to their original state before the patient took antibiotic treatment.

This time, the diarrhea came back two weeks after he stopped taking Vanco. Al’s frustration level went through the roof. He felt that C. diff had taken over his life and he would never get better. He even worried that his C. diff infection was going to be fatal. At that point, his son went online to see what options were available for patients with multiple recurrences of C. diff. He read that many patients got better after a stool transplant, also known as a fecal transplant.

Getting a stool transplant is like reseeding a lawn that has been damaged by weeds, drought, and poor soil. The soil is prepared, watered, and seeded, and eventually a new lawn replaces the old. In a stool transplant, the “seeds” are a suspension or “shake” of healthy stool, taken from a healthy donor, and transferred via a medical device to the colon of a person suffering from C. diff. The procedure is straightforward and has a permanent cure rate of 95% among C. diff patients. Chapter 3 describes the procedure in more detail.

Al was eventually referred to a gastroenterologist (GI) specialist at our hospital who had experience with stool transplants to treat C. diff. The doctor explained that the C. diff infection kept coming back because Al’s colonic flora was depleted from all the antibiotics taken over the past three months. The normal colonic flora provides a protective barrier against C. diff, other harmful bacteria, and viruses. That’s why nearly every patient who gets C. diff has taken an antibiotic before the diarrhea starts. But Al’s barrier was so low that the C. diff kept coming back after he stopped the Vanco.

Once patients have had one recurrence, the odds go way up that they will have multiple repeat attacks. We have seen patients with more than 10 such recurrences. They are typically elderly with other illnesses such as heart failure, cancer, or chronic kidney disease, all of which can depress the immune system. Depression, fatigue, and weight loss are very common in so-called “repeaters.”

In order to try a stool transplant …

To read the rest of Al’s story and to learn more about stool transplants, please download or purchase C. Diff In 30 Minutes.