The following C. diff case study was excerpted from C. Diff In 30 Minutes: A guide to Clostridium difficile for patients and families by Dr. J. Thomas Lamont, M.D.

Mrs. E was a feisty 80-year-old grandmother living alone in her home with two cats and a canary. She came to my office because she wasn’t sure her C. diff was gone. 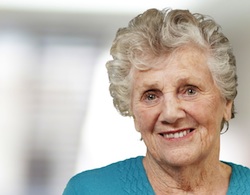 Her story started three months earlier, after she had a knee replacement. During her recovery, she developed a fever and received the antibiotic Cipro for just three days. A week after discharge, she got a C. diff infection while staying in a rehab hospital. After a week of diarrhea, her doctor tested her stool for C. diff. When the test came back positive, she was started on Flagyl, the same antibiotic taken by both Jeannie and Al. Her response was excellent, and five days later she was no longer having any diarrhea.

After Mrs. E had finished the Flagyl and was back home again, she visited her doctor who decided to test her stool for C. diff to see if it was gone. To his surprise and to Mrs. E’s disappointment, the test came back positive. A second course of Flagyl was started, even though she was feeling fine. A few weeks after that, her stool again tested positive. After several more courses of Flagyl, which had no effect on her stool test, she came to see me for a second opinion. Her first words in the office were “Do you think I will ever be rid of this awful C. diff?”

In fact, it was easy to reassure Mrs. E that she did not need any more stool tests to see if she still had C. diff, and she definitely didn’t need any more Flagyl. And yes, she would eventually get rid of the C. diff. She just needed to be patient and wait for her normal colonic flora to recover, a process that can take one to three months after the last dose of antibiotic.

What is a post-convalescent C. diff carrier state?

Mrs. E’s story is very common, and it’s one that can be confusing to patients and their doctors. Her case is an example of the post-convalescent C. diff carrier state. This occurs when patients recover from diarrhea and other C. diff symptoms, usually in the first week of treatment, However it may take months before the C. diff finally disappears from the stool. During this time the patient is passing C. diff in the stool, which can infect other people. Carriers have no diarrhea or other symptoms because they have developed antibodies to the C. diff toxins. These antibodies neutralize the toxins and prevent diarrhea, fever, and cramps. But the C. diff lingers in the bowel. How? It takes advantage of the lowered resistance of the colonic flora caused by the original antibiotic. In Mrs. E’s case the antibiotic Cipro was used to treat her knee infection, and Flagyl was used to treat her C. diff.

We’ll cover the importance of healthy colonic flora later in the guide, but for the time being, understand that Mrs. E was in a sort of limbo, in which the symptoms of the disease are gone (no diarrhea, pain or fever) but the C. diff lingers for a while (stool test still positive). More information about convalescent carriers can be found in Chapter 2.

To learn more about C. diff, download or purchase a copy of C. Diff In 30 Minutes: A guide to Clostridium difficile for patients and families by Dr. J. Thomas Lamont, M.D.

C. diff in hospitals: How it spreads