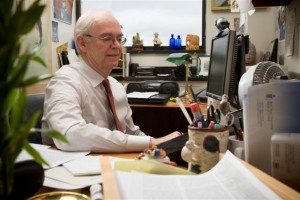 Dr. J. Thomas Lamont received his medical degree in 1965 from the University of Rochester, and was intern, resident and chief resident in medicine at UCLA.

Dr. Lamont’s clinical interests are in the area of intestinal infections, particularly the management of C. diff infections. Thomas Lamont and his colleagues have made a number of important discoveries about C. diff infections, including how to diagnose C. diff in patients with inflammatory bowel disease, and how the immune system protects against this infection.

In addition to his clinical activities, Dr. Lamont serves as a mentor for young scientists and faculty members, and as a resource for manuscript, grant preparation, and career planning.

Dr. J. Thomas Lamont currently serves as Associate Editor for GI and Liver Diseases at the New England Journal of Medicine, and as Editor-in-Chief for Gastroenterology for UpToDate in Medicine.